The 1296 Borough Rental referred to in my previous blog is the earliest known ‘census’ carried out in Birmingham. Official censuses didn’t begin in this country until 1801, but recording information about people, land and property has preoccupied governments since time immemorial. We know, for instance, that William the Conqueror commissioned the great land survey, Domesday Book, in 1086 to assess how much his newly occupied country was worth. The Borough Rental was no different in that its main purpose was to keep a record of the rents owed to the lord of the manor. However, like Domesday, it doesn’t give an accurate indication of Birmingham’s population, as it mainly lists principle tenants, those people renting land directly from the lord. William de Birmingham, Lord of the Manor, was in essence a landlord and generated much of his income from renting his land to Birmingham townspeople. 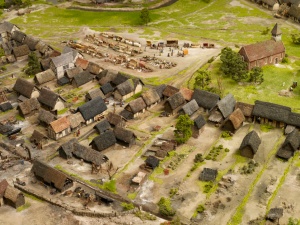 How William de Birmingham made his money! Just some of the burgage plots he rented out to the townspeople.

Our model isn’t just about buildings and institutions in medieval Birmingham, it’s first and foremost about the real people who lived in the town. The Borough Rental doesn’t just record the names of townspeople though. In some cases, it lists their trades and locations. This, together with archaeological evidence from the Bull Ring excavations, has given us a unique opportunity to quite literally trace their footsteps, or at least the general area of Birmingham they called home. We want to allow visitors to learn more about the real townspeople and to ‘interact’ with them through our model.

They can do this through a series of push buttons, which link to eight characters positioned around this interactive. The button will trigger a light and illuminate a character in the model, and visitors can learn more about where that person lived or worked. The characters we’ve chosen represent the wide spectrum of wealth and trades in Birmingham, ranging from the lord of the manor, to everyday folk like tanners and potters. 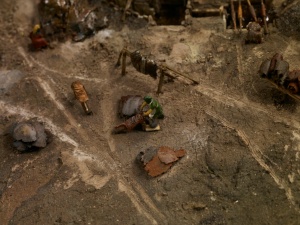 A tanner scraping skins to remove the unwanted hair. 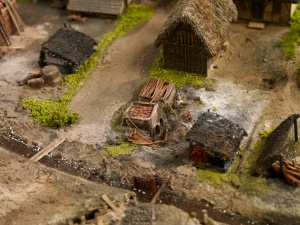 Kilns were located in people’s back yards away from the main buildings because of the risk of fire.

Archaeology and history go hand-in-hand in this display as the two disciplines combined provide us with an invaluable insight into how people lived. For instance, there will be a selection of cattle horns on display which represent the established tanning industry in medieval Birmingham. The horns also serve to highlight the presence of Welsh cattle drovers who came here to sell their cows at market. With its abundant natural springs and streams scattered around the market place, Birmingham was the perfect place to water livestock. One of our characters, Richard le Couherde, which translates as the cow herder, would have played his part in helping the drovers to guide the cattle to market in the busy town. We know that Birmingham was already at the centre of a well-established road network by this stage, and there’s evidence to suggest that the roads the drovers used were already very old by 1300. Welsh names like Jones, Prys and Brangwayn even crop up in the Rental. While we don’t know if these men were drovers, we can safely assume that they, or their ancestors used these roads to make their journeys to Birmingham. 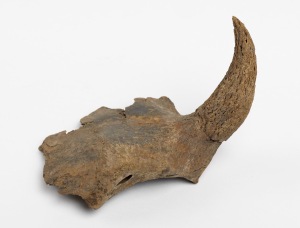 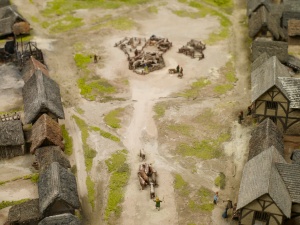 Richard le Couherde driving the cattle to market or the ‘Bull Ring’ as it became known.

Birmingham was built on migration and this is a strong theme running throughout the new History Galleries. This trend was well under way in the Middle Ages, and was not simply a nineteenth and twentieth-century phenomenon as is often assumed. Other surnames in the Rental stress this point and include the likes of de Coventre (‘from Coventry’), Newporde (‘from Shropshire or Wales’), de Parys (very possibly ‘from Paris’) and those places closer to home, including de Edebaston (‘from Edgbaston’) and de Norton (‘from King’s Norton’). 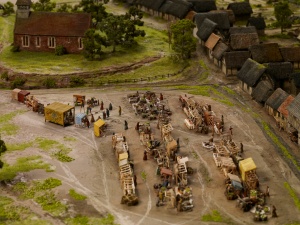 Birmingham’s thriving market attracted migrants from nearby settlements. Its nearest competition came in 1300 when Sutton Coldfield was granted a market charter. By this point, Birmingham’s market was nearly 150 years old and too well-established for Sutton to pose a threat.

As well as locational surnames, the Rental lists many occupational names which were very common in the Middle Ages. Nicholas le Sawyer would have been responsible for many of the new builds in the town. Le Sawyer means the person who saws wood, and in a place constantly attracting new migrants, homes would have been in demand. 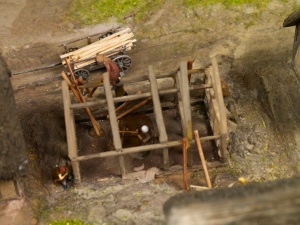 A sawyer hard at work. 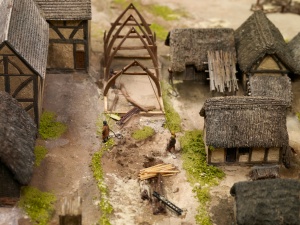 Another new build, but this time workers are ‘raising the cruck’, which refers to the ‘A’ frame wooden beams they are hauling into place. The other common type of building was the ‘box frame’ to the left of the cruck.

One thing that tied all these people together were the rents they paid to William de Birmingham. But, even William wasn’t top of the tree. Above him were the Lords of Dudley from whom he held the manor of Birmingham, and above all of them was the king. 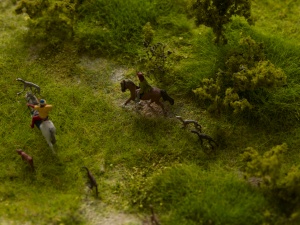 William de Birmingham in his deer park with his huntsman and greyhounds.

Having access to such a valuable document like the Borough Rental will help people to make more sense of the objects on display in the new History Galleries. While we don’t know the biography of people’s lives in the medieval town, we can make links through their professions, where they lived and even the names we share with them. We can identify with their daily struggle to pay the rent and put food on the table, and while we can never fully ‘know’ them, we can learn more than we ever could have hoped for, simply because of the discovery of this document just a few years ago. It just makes you wonder what else is out there, above ground and below!

Once again, special thanks to our model makers, Eastwood Cook http://www.eastwoodcook.com/

Follow me on Twitter @CinnamonLatte17 to keep up to date with the latest developments on the Birmingham History Galleries.

This blog first featured on Posterous in July 2012,  http://birminghammag.posterous.com/exploring-medieval-birmingham-part-ii

A scale model allows visitors to depict a scene in a way that words or illustrations sometimes fail to do. To put it simply, it does all the hard work for the viewer by giving them a unique perspective that allows them to survey a landscape in its entirety. We wanted to do exactly that for our visitors at Birmingham Museum & Art Gallery. The model we recently commissioned for the new History Galleries illustrates what Birmingham might have looked like in 1300. ‘Might’ is deliberately used here because there are some physical features of the town for which we simply have no concrete evidence. For instance, we don’t know what the fabric of the buildings looked like and whether these buildings were front side or gable end onto the street. Timber framed buildings from the 13th century rarely survive. In Birmingham’s case, its oldest timber framed building is the 15th-century Old Crown Pub in Deritend. Nevertheless, we’ve done what historians do best! We’ve used the abundant evidence we have relating to 14th-century buildings and the limited knowledge from the 13th to produce a ‘most likely’ case scenario. 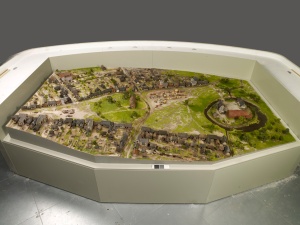 Model of medieval Birmingham in 1300. Notice the familiar triangular shape to the left of the model, which you can still see today as you walk downhill from New Street to St Martin’s Church.

Some people may be thinking ‘why not just focus on the later medieval period, for which we have more evidence?’ Well, we do have one tangible piece of factual evidence which we’ve based the blueprint of the model on. That is a document called a Borough Rental dating from 1296. This recently discovered document lists the names of townspeople who rented plots of land in Birmingham from the lord of the manor. It also tells us that there were 250 dwellings in Birmingham in 1296. Using this record, along with research from specialists, George Demidowicz and Mike Hodder, we have been able to map rented plots of land that existed in the town. These areas were known as ‘burgage plots’ and in some cases we can pinpoint exactly where certain townspeople lived. 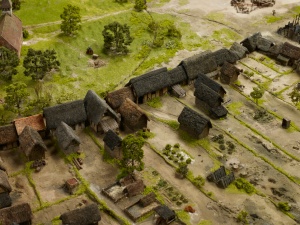 The distinctive long and narrow burgage plots were a common feature of medieval towns. You can also see the ‘half’ plots, where land has been subdivided because of population growth or simply to generate more income.

One such person is Roger le Moul, the wealthiest merchant in 13th century Birmingham. Not only did he own 17 plots, he also gave his name to one of the best known streets in Brum: the Moulestrete of 1437 is today’s Moor Street. Birmingham, a place many assume emerged out of the Industrial Revolution was already thriving in the 13th century and this legacy is embedded in the surviving place and street names of the modern city! Our model, however, doesn’t show the full extent of medieval Birmingham. We’ve simply focused on the market place, the heart of the town, and the burgage plots that surrounded it. 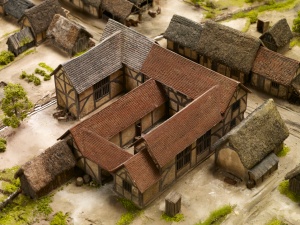 The Borough Rental also helpfully identifies the locations of Birmingham’s early industries, demonstrating why they were situated where they were. Tanning pits, a necessary component of the leather industry were located on Park and Edgbaston Streets. These streets were on the edge of the town and were ideal locations for such a noxious and smelly trade that used urine and animal faeces. Similarly, pottery making, another important early trade was located on the periphery of the town (on the site of Selfridges car park today) because of the fire hazards associated with the craft. In this way, the model really helps to emphasise the rationale of early town planning. 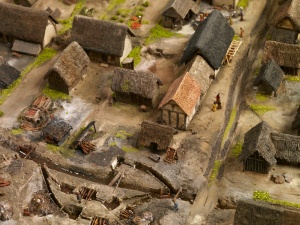 Tanning pits on Park Street, now the site of Selfridges. 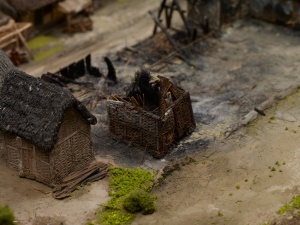 Fire was one of the perils of everyday life in any medieval town.

The beauty of our model is that it will help to dispel the myth that there was nothing here in the Middle Ages, when in fact we know that Birmingham was a bustling market centre and home to around 1,500 people. So, if you want to meet William de Birmingham, Richard le Couherde or Isabell le Sonster amongst many other medieval Brummies, visit the new Birmingham History Galleries this October and immerse yourself in the medieval history that made our modern city. 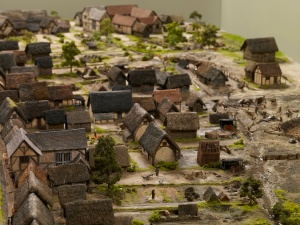 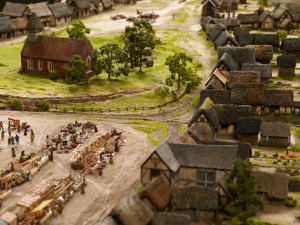 St Martin’s Church sat at the centre of the medieval market town. 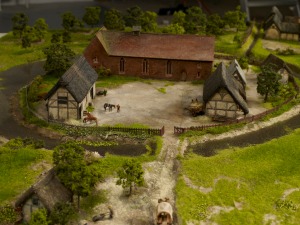 The biggest house in town, and home to William de Birmingham, Lord of the Manor.

Look out for my next blog which focuses on the interactive features of the model.  You can see the model on display this October in the new Birmingham History Galleries, Birmingham, its People, its History.

Special thanks to our model makers, Eastwood Cook http://www.eastwoodcook.com/

This blog first featured on Posterous in June 2012,  http://birminghammag.posterous.com/exploring-medieval-birmingham

Blogs coming very soon, but not as fast as this! 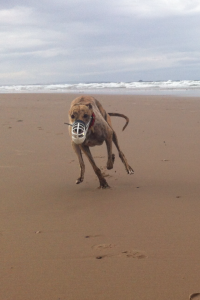 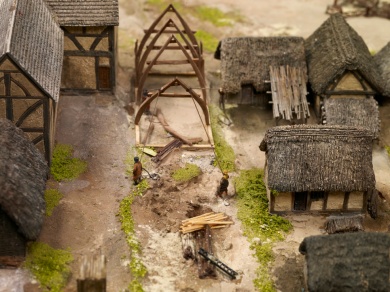 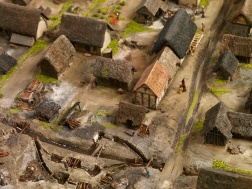 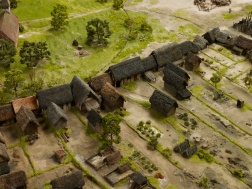 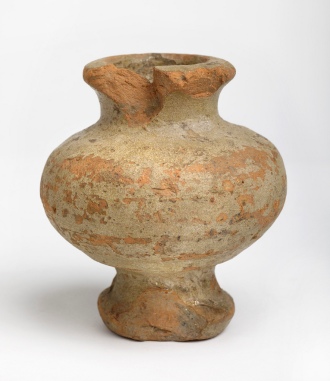 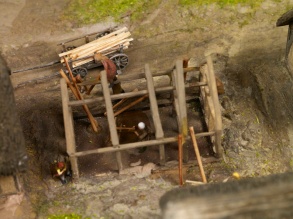 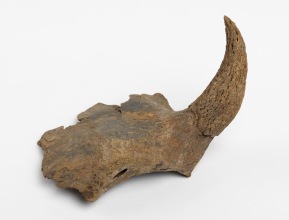 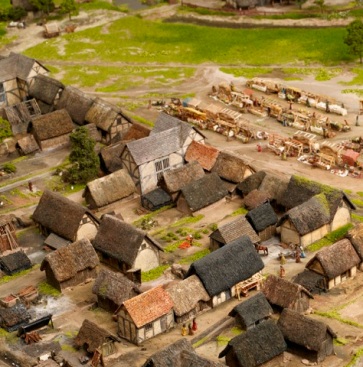 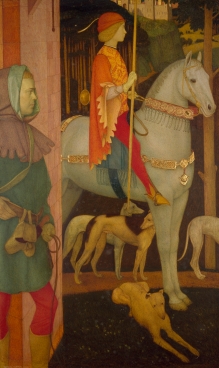 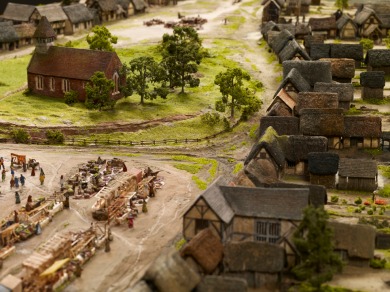 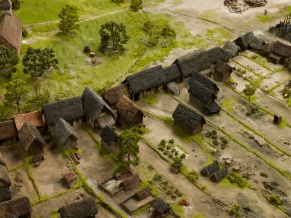 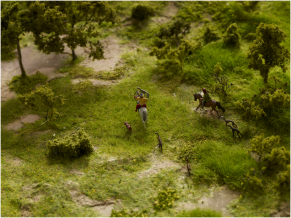